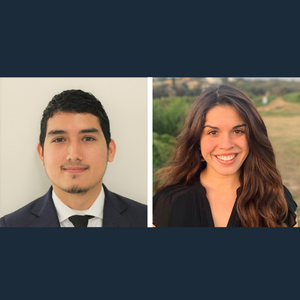 Brumley Next Generation Fellows will participate in events and conduct research related to intelligence under the direction of ISP principals.

Gabriel Cortez graduated from Northern Arizona University with a bachelor’s degree in Public Administration with summa cum laude honors. As a Charles B. Rangel Fellow with the U.S. State Department, Gabriel will join the Foreign Service after completing his Master’s in Global Policy Studies at the LBJ School of Public Affairs. Gabriel has an extensive work history with the U.S. federal government, working and interning with different offices and agencies like the U.S. Helsinki Commission, U.S. House of Representatives, U.S. Department of Health, and U.S. Department of State at its General Consulate in Milan, Italy. He has lived abroad in several countries, including Japan and Italy, and served in the Peace Corps in Ukraine for three years as a Volunteer Leader. His policy areas include U.S. Foreign Policy, Diplomacy, National Security, the European Union, Eastern Europe, and Intelligence. As a Brumley Fellow, Gabriel will work with ISP Director Stephen Slick.

Marigny Kirschke-Schwartz is a second-year Master of Global Policy Studies candidate at the LBJ School of Public Affairs. She received a Bachelor of Arts in Peace, War, and Defense and a minor in Islamic and Middle Eastern Studies from University of North Carolina at Chapel Hill. Her current research examines the efficacy of counterterrorism policy and reforms in the U.S. Intelligence Community, with broad interests in covert action and national security. She is spending the summer of 2020 working as a Research Associate for Lawrence Livermore National Laboratory, focusing on terrorism and nuclear nonproliferation policy. Upon completion of her degree, Marigny plans to pursue a career in public service. As a Brumley Fellow, Marigny will work with Professor Paul Pope, Senior Fellow at the Intelligence Studies Project.