The Inman Award competition is designed to recognize outstanding research and writing by students at the undergraduate or graduate levels on topics related to intelligence and national security. There is no prescribed topic, format, or length for papers submitted. It is presumed that most papers will have been prepared to satisfy a course or degree requirement of the author’s academic program. Co-authored and “team project” papers will be accepted. 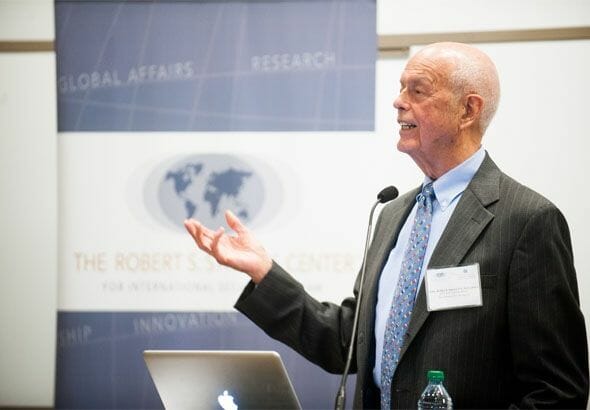 All undergraduate and graduate students enrolled at an accredited U.S. higher education institution during the 2021-22 academic year are eligible to participate. A student may submit only one paper that has not been published previously.

Papers will be submitted electronically via the form here, which will include a short biographic profile of the author(s) with current contact information, the date when the paper was completed, and a description of any course requirement that was satisfied by the paper. All papers should be appropriately attributed using footnotes or endnotes. Submission deadline is June 30, 2022.

Papers will be judged on the basis of academic rigor, clear presentation, creativity, and the potential to contribute positively to the U.S. intelligence community. Faculty and staff members associated with the Intelligence Studies Project, Strauss Center, Clements Center, and/or LBJ School of Public Affairs at UT Austin will review the submissions and select the winning papers.

Ownership and Use: All papers submitted in connection with the Inman Award competition shall become the property of The University of Texas at Austin and the Intelligence Studies Project for 60 days after the June 30, 2022 deadline. All rights revert to the author(s) after that date or prior to that date with express authorization of the Intelligence Studies Project.

Intellectual Integrity: Papers submitted in connection with the Inman Award competition will be presumed to satisfy the academic standards of the institution where the author is enrolled. At the sole discretion of the Intelligence Studies Project, papers judged not to meet appropriate standards of intellectual integrity will be disqualified from the competition.

The Inman Award and a $5,000 prize will be presented to the author of the winning paper. Two papers will be recognized as Inman Award semifinalists and $2,500 will be awarded to the author of each. Cash prizes will be conveyed directly to sole authors or divided equally among co-authors. At least one cash prize will be awarded to an undergraduate author. Recipients of cash prizes are solely responsible for any tax liability that may accompany receipt of such funds.

If requested, the Intelligence Studies Project will assist in publishing the winning paper and ensure it is made available to current intelligence practitioners interested in the paper’s topic. At the discretion of the Intelligence Studies Project, the authors of meritorious papers that are not recognized with an award and cash prize may be offered support in further research and editing in anticipation of publication.

The recipient of the 2021 “Bobby R. Inman Award” for student scholarship on intelligence is Dr. Alexandra Sukalo, a recent PhD recipient from Stanford University who focuses on Russian and Eastern European History. Her PhD thesis, The Soviet Political Police: Establishment, Training, and Operations in the Soviet Republics, 1918-1953, is grounded in extensive archival research and provides a comprehensive account of how Lenin, and later Stalin, created, deployed and controlled myriad intelligence and internal security organs to suppress restive nationalists in the western and southern Soviet republics.

The undergraduate semifinalist is Ivanna Shevel, a recent graduate in Political Science and Law, Letters, and Society at the University of Chicago. Her paper, Briefing the President: The Manipulation of Analytic Uncertainty in Daily Intelligence, evaluates declassified Presidential Daily Briefing articles and describes how editors often remove or moderate the indicators of uncertainty in the process of shortening and adapting intelligence assessments for the U.S. president.

The recipient of the 2020 “Bobby R. Inman Award” for student scholarship on intelligence is Diana Bolsinger, a PhD candidate at the University of Texas at Austin's LBJ School of Public Affairs. Her paper, "Though Not at Any Price:" LBJ, Pakistan, and Bargaining in an Asymmetric Intelligence Liaison Relationship, describes the Cold War intelligence liaison between the U.S. and Pakistan and assesses the impact of these secret intelligence arrangements on this critical bilateral relationship.

The graduate student semifinalist is Ryan Dukeman, a PhD candidate in International Relations and American Government at Princeton University. His paper, Crucibles of Crisis: The Creation of the House and Senate Select Committees on Intelligence, 1954-1977, chronicles two decades in the relationship between Congress and America's intelligence agencies culminating in the Church and Pike committee investigations and establishment of the SSCI and HPSCI.

The undergraduate semifinalist is Megan Hogan, a third-year student majoring in International Relations and Economics at the College of William and Mary. Her paper, Replicating Reality – Advantages and Limitations of Weaponized Deepfake Technology, describes advances in deceptive manipulation of digital images and argues that the U.S. Department of Defense should expand its current video authentication research to include deepfake weaponization for use in coercive diplomacy and warfighting.

The recipient of the 2019 “Bobby R. Inman Award” for student scholarship on intelligence is Jeffrey Rogg, a PhD candidate in history at the Ohio State University concentrating on conflict, peace and diplomacy.  His paper, Deciphering the “American Black Chamber,” chronicles the rise and fall of the Cipher Bureau and introduces a theory of “civil-intelligence”relations in the U.S.

The graduate student semifinalist is Peter Roady, a PhD candidate in U.S. history at Columbia University. His paper, Constructing a New Legal Framework for Intelligence: The Ford Administration, the National Security Agency, and the Year of Intelligence, reexamines based on archival sources the internal deliberations of the Ford Administration aimed at blunting efforts to legislate a charter for U.S. intelligence, limiting the scope of the Foreign Intelligence Surveillance Act, and preserving executive primacy over intelligence activities.

The recipient of the 2018 “Bobby R. Inman Award” for student scholarship on intelligence is Peter Scoblic, a DBA candidate at Harvard Business School. His paper, "Beacon and Warning: Sherman Kent, Scientific Hubris, and the CIA's Office of National Estimates" exploits original archival research to offer a fresh look at the "father of estimative intelligence" and also a timely warning on the predictive utility of intelligence analysis. The winning paper is now available in the Texas National Security Review.

The undergraduate student semifinalist is Ari Weil, a recent graduate of Pomona College and now a master's candidate in International Relations at the University of Chicago. His paper, "Terrorist Celebrity: Online Personal Branding and Jihadist Recruitment and Planning" skillfully documents the increasingly sophisticated use of social media tools and models by terrorist leaders.

The recipients of the 2017 “Bobby R. Inman Award” for student scholarship on intelligence are Welton Chang, a Ph.D. candidate at the University of Pennsylvania, and Elissabeth Berdini, a J.D. candidate at Northwestern University’s Pritzker School of Law. Their paper, “Restructuring Structured Techniques in Intelligence Analysis,” challenges whether the use of structured techniques improves the quality of intelligence analysis in the absence of reliable metrics for gauging possible overcorrection. The underlying research was supported by the ODNI's Intelligence Advanced Research Projects Activity and was supervised by David Mandel and Philip Tetlock.

The graduate student semifinalist is Andrew Indorf, a recent graduate of Stanford Law School. His paper, “Blocking the Backdoor Loophole: A Case for the Unconstitutionality of U.S. Law Enforcement Queries of Data Collected Under Section 702 of the FISA Amendments Act of 2008,” argues that the ability of federal agencies to use foreign intelligence information for law enforcement purposes should be constrained during the upcoming congressional reauthorization of the FAA.

The undergraduate student semifinalist is Joyce Koltisko, a senior at Yale University majoring in Global Affairs and Economics. Her paper, “The Current Status of Suspicious Activity Reporting and Considerations for Fusion Centers in the Future Development of the SAR Program,” proposes greater standardization of SAR collection and analysis criteria to improve the performance of regional intelligence fusion centers and to achieve a sustainable balance between civil liberties and domestic security concerns.

The Intelligence Studies Project of the University of Texas at Austin is pleased to announce the winner and two semifinalists of the second “Bobby R. Inman Award” recognizing outstanding student research and writing on topics related to intelligence and national security during the 2015-2016 academic year.

The recipient of the 2016 “Inman Award” is Quentin Buckholz, a Masters of International Affairs candidate at Columbia University's School of International and Public Affairs. In his paper, “The 1980’s War Scare: Misperceptions, Mistaken Beliefs, and Missed Signals in US-Soviet Relations,” Mr. Buckholz assesses how the Soviet Union came to believe in the threat of a nuclear first strike by the United States in the early 1980s, and how US intelligence misinterpreted or dismissed that fear.

The undergraduate semifinalist is James “Jake” Barnett, a recent graduate of the University of Texas at Austin. Mr. Barnett’s History Honors Thesis, “When Culture Eats Strategy: Examining the Phoenix/Phung Hoang Bureaucracy in the Vietnam War,” uses statistical methods to assess the effectiveness of (and accountability for) US counterinsurgency programs undertaken during the Vietnam conflict.

More than 150 high-quality papers from students at dozens of U.S. colleges and universities were submitted in the second Inman Award competition. The papers were evaluated on their academic rigor, clear presentation, creativity, and the potential to contribute positively to the US intelligence community. The Intelligence Studies Project extends sincere thanks to the participating students (and their professors) for continued support of this unique award program.

The Intelligence Studies Project of the University of Texas at Austin is pleased to announce the winner and two semifinalists of its inaugural competition recognizing outstanding student research and writing on topics related to intelligence and national security.

The graduate student semifinalist is Cullen Nutt, a PhD candidate at the Massachusetts Institute of Technology. His paper, Chronicle of a Correction Foretold: The Push and Pull of Nuclear Intelligence Detection, assesses U.S. and Israeli intelligence analysis of WMD programs in Libya and Syria, developing a model to explain when it is most likely that western intelligence agencies will detect the existence of a hidden nuclear weapons program.

With over one hundred impressive papers from students at dozens of U.S. universities and colleges, the papers were evaluated on their academic rigor, clear presentation, creativity, and the potential to contribute positively to the U.S. intelligence community. In addition to the $5000 cash award for the winner and the $2500 semifinalist cash awards, these three papers, linked above, will be posted on the Strauss and Clements Centers websites and will be made available to current intelligence practitioners.

The Intelligence Studies Project was established at the University of Texas at Austin in 2013 as a joint venture of the Robert S. Strauss Center for International Security and Law and the William P. Clements, Jr. Center for National Security. The Project’s mission is to improve understanding of intelligence activities and institutions through research, courses and public events bringing intelligence practitioners together with scholars, students, and the public. The Inman Award recognizes more than six decades of distinguished public service by Bobby R. Inman, Admiral, U.S. Navy (Ret.). Admiral Inman served in multiple leadership positions in the U.S. military, intelligence community, private industry, and the University of Texas. His previous intelligence posts include Director of Naval Intelligence, Vice-Director of the Defense Intelligence Agency, Director of the National Security Agency, and Deputy Director of Central Intelligence. He continues to serve as a teacher and mentor to students, faculty members, and current government officials while occupying the Lyndon B. Johnson Centennial Chair in National Policy at the LBJ School of Public Affairs.