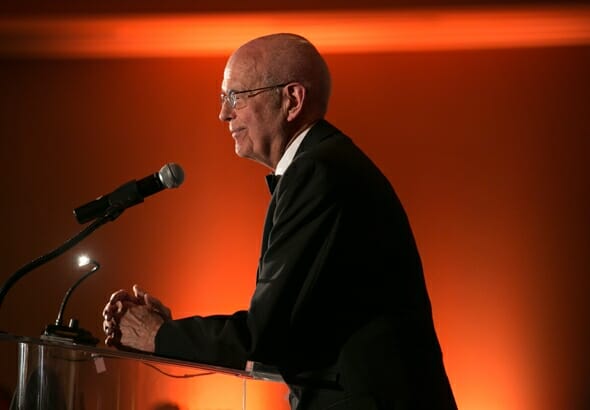 The Intelligence Studies Project of The University of Texas at Austin is pleased to announce the winner and two semifinalists of its third annual “Bobby R. Inman Award” competition recognizing outstanding student research and writing on topics related to intelligence and national security.

The recipients of the 2017 “Bobby R. Inman Award” for student scholarship on intelligence are Welton Chang, a Ph.D. candidate at the University of Pennsylvania, and Elissabeth Berdini, a J.D. candidate at Northwestern University’s Pritzker School of Law.  Their paper, “Restructuring Structured Techniques in Intelligence Analysis,” challenges whether the use of structured techniques improves the quality of intelligence analysis in the absence of reliable metrics for gauging possible overcorrection.  The underlying research was supported by the ODNI’s Intelligence Advanced Research Projects Activity and was supervised by David Mandel and Philip Tetlock.

The graduate student semifinalist is Andrew Indorf, a recent graduate of Stanford Law School.  His paper, “Blocking the Backdoor Loophole: A Case for the Unconstitutionality of U.S. Law Enforcement Queries of Data Collected Under Section 702 of the FISA Amendments Act of 2008,” argues that the ability of federal agencies to use foreign intelligence information for law enforcement purposes should be constrained during the upcoming congressional reauthorization of the FAA.

The undergraduate student semifinalist is Joyce Koltisko, a senior at Yale University majoring in Global Affairs and Economics.  Her paper, “The Current Status of Suspicious Activity Reporting and Considerations for Fusion Centers in the Future Development of the SAR Program,” proposes greater standardization of SAR collection and analysis criteria to improve the performance of regional intelligence fusion centers and to achieve a sustainable balance between civil liberties and domestic security concerns.

With over one hundred impressive papers from students at dozens of U.S. universities and colleges, the papers were evaluated on their academic rigor, clear presentation, creativity, and the potential to contribute positively to the U.S. intelligence community. In addition to the $5000 cash award for the winner and the $2500 semifinalist cash awards, these three papers, linked above, will be posted on the Strauss and Clements Centers websites and will be made available to current intelligence practitioners.

The Intelligence Studies Project was established at the University of Texas at Austin in 2013 as a joint venture of the Robert Strauss Center for International Security and Law and the William P. Clements, Jr. Center for National Security. The Project’s mission is to improve understanding of intelligence activities and institutions through research, courses, and public events bringing intelligence practitioners together with scholars, students, and the public.

The Inman Award recognizes more than six decades of distinguished public service by Bobby R. Inman, Admiral, U.S. Navy (Ret.). Admiral Inman served in multiple leadership positions in the U.S. military, intelligence community, private industry, and the University of Texas. His previous intelligence posts include Director of Naval Intelligence, Vice-Director of the Defense Intelligence Agency, Director of the National Security Agency, and Deputy Director of Central Intelligence. He continues to serve as a teacher and mentor to students, faculty members, and current government officials while occupying the Lyndon B. Johnson Centennial Chair in National Policy at UT’s LBJ School of Public Affairs.