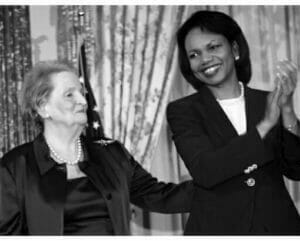 Susan Sutton joined the Foreign Service in 1985. Over her 35-year career, she worked primarily on Eastern Europe and Southeast Asia. Susan was Deputy Chief of Mission in Hanoi, Vietnam, from 2015-2017. She previously served as Deputy Chief of Mission in Sofia, Bulgaria and Vientiane, Laos, and as political counselor in Bangkok, Thailand. In Washington D.C., Susan was the Director of the Office of Maritime Southeast Asia, with responsibility for the Philippines, Indonesia, Malaysia, Brunei, Singapore and Timor-Leste, from 2012 to 2014. Previously, she served in the Bureau of Democracy, Human Rights and Labor, and as the Country Officer for Bulgaria and Albania. From 2018 to 2020, she was on the faculty of the National War College in Washington, D.C.

Dr. Bianca Adair, an officer in the Directorate of Operations at the Central Intelligence Agency (CIA), is the Resident Intelligence Officer at the University of Texas at Austin’s LBJ School of Public Affairs (2020–22). She has more than 16 years of federal government service in leadership positions in Washington, D.C., and foreign field posts. In her nine years at the CIA, Adair has worked in the Middle East, Europe, and North Africa on security, counterterrorism, and foreign policy, with a special focus on Iran. Prior to her time in the CIA, she served in Iraq and the United Arab Emirates as a Foreign Service Officer in the U.S. Department of State. The recipient of a Fulbright Research Grant on Austrian-Hungarian Relations and conversant in Persian (Farsi), French, Tajiki, German, and Hungarian, Adair holds a Ph.D in political science at The University of Alabama.