The President’s Book of Secrets: Intelligence Briefings to America’s Presidents

On Thursday, February 16, 2017, the Intelligence Studies Project, Strauss Center, Clements Center, and the LBJ Presidential Library welcomed David Priess for a talk on his book The President’s Book of Secrets: The Untold Story of Intelligence Briefings to America’s Presidents from Kennedy to Obama.

The President’s Book of Secrets tells the history of the President’s Daily Brief (PDB) – one of the most highly guarded and valued documents to reach the Oval Office. In order to write the book, Dr. Priess discussed how he conducted many interviews with every living former President and Vice President, and most living former National Security Advisors, White House Chiefs of Staff, Secretaries of States, and Secretaries of Defense. 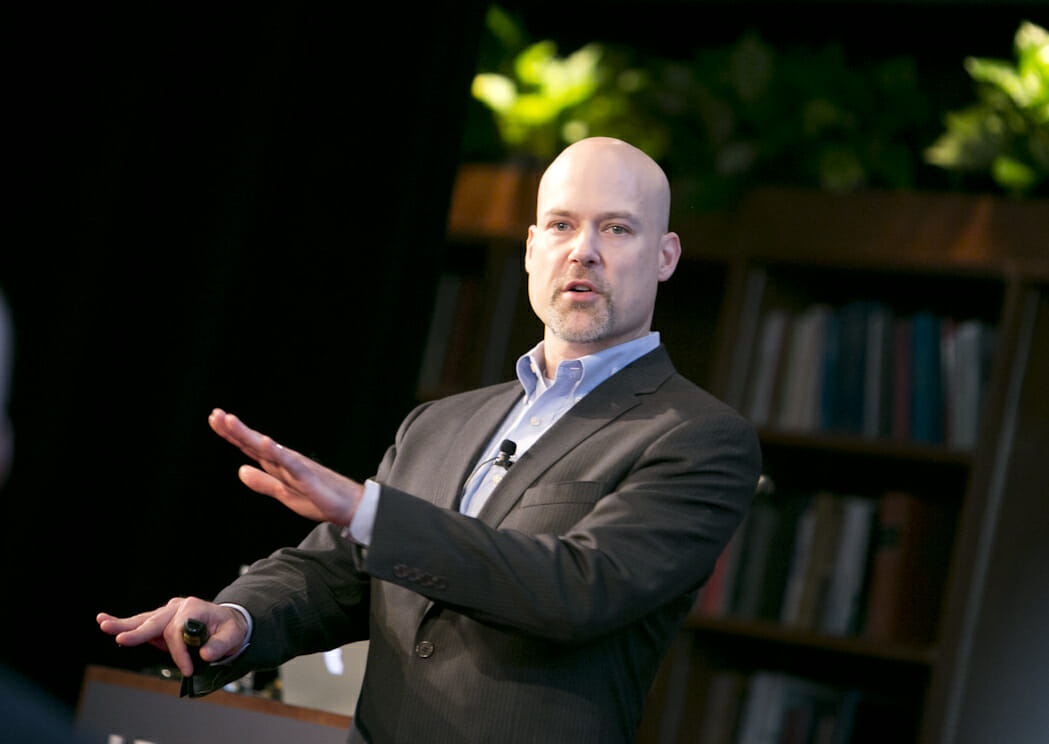 Dr. Priess began his talk by discussing the origins of the PDB with President John F. Kennedy. At the time, as Dr. Priess explained, the PDB was just coming to fruition, known then as the President’s Intelligence Checklist (PICL). President Kennedy liked his briefs to be easily accessible, tucked away in his pocket for speed reading throughout the day. Just as intelligence officers and briefers were getting a handle on working with President Kennedy, he was assassinated and Vice President Lyndon B. Johnson assumed his duties.

As Dr. Priess goes on to explain for the duration of his talk, each president, being the unique – and sometimes odd – individuals that they are, put their own spin on briefings. LBJ’s approach to the document was to make it less of the checklist that Kennedy preferred, and more of a book that he could peruse through during his nightly reading sessions in bed, thus marking the end of the PICL and the beginning of the President’s Daily Brief. 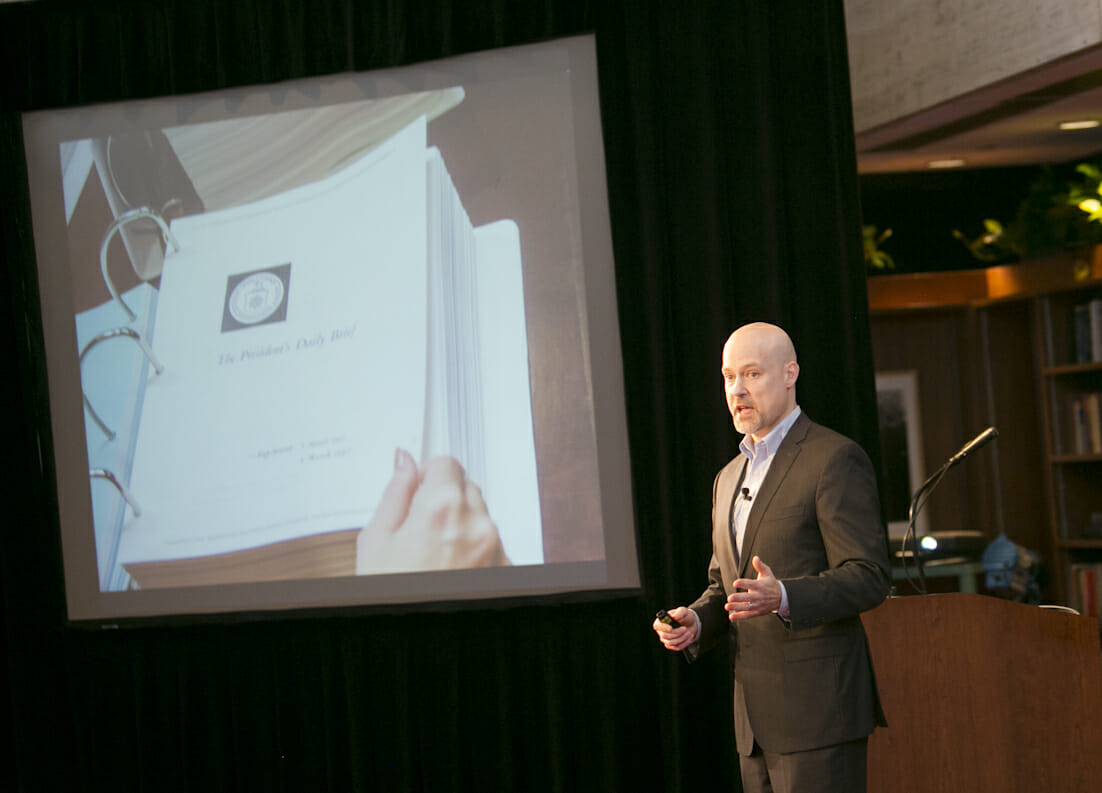 After each President is elected to office, the same cycle with the PDB tends to repeat itself. One of the first questions addressed is whether or not the new President will even want to read the PDB. President Nixon proved that eschewing the PDB from his daily agenda was possible, while President George H. W. Bush, as Dr. Priess tells it, was so serious about the PDB that he did not have to be serious with it at all times.

Another question presidents face in regards to the PDB, and one that has proven to be contentious, is who will be on the list of persons to view the PDB. Dr. Priess explained how almost every President had a different list of names with the privilege of viewing the PDB. Recipients of the PDP could include, or not include, the Vice President, the Secretary of State, the Secretary of Defense, and several other officials. Dr. Priess explained that, sometimes, even the Vice President would be left in the dark on intelligence and national security updates. 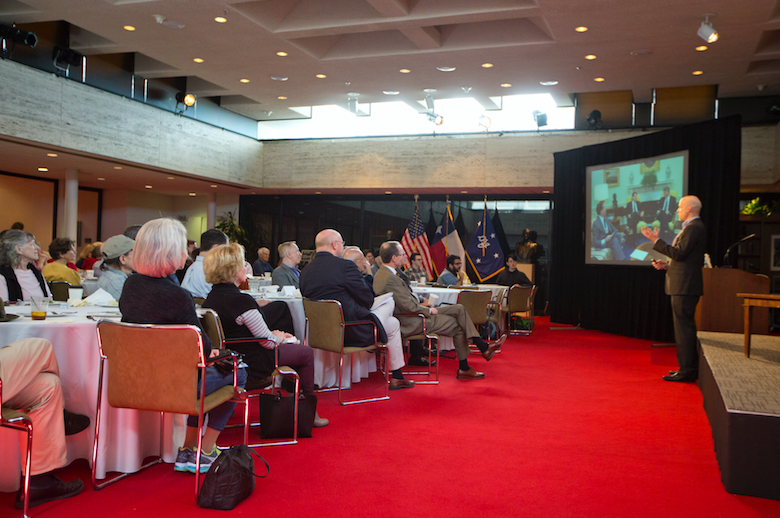 The history of the PDB has largely been kept from the public, as the available documents run about 40 years behind where we are today. Most of the information in the PDB’s is at the highest level of classification, making these documents some of the most valuable in US history. One of the biggest points to note from Dr. Priess’s talk and Q&A with ISP Senior Fellow Paul Pope is that each president will have a different approach to how they receive their intelligence. As a former intelligence briefer himself, Dr. Priess was able to comment on the importance of tailoring briefs to fit the President’s preferences, while remaining neutral on policy. 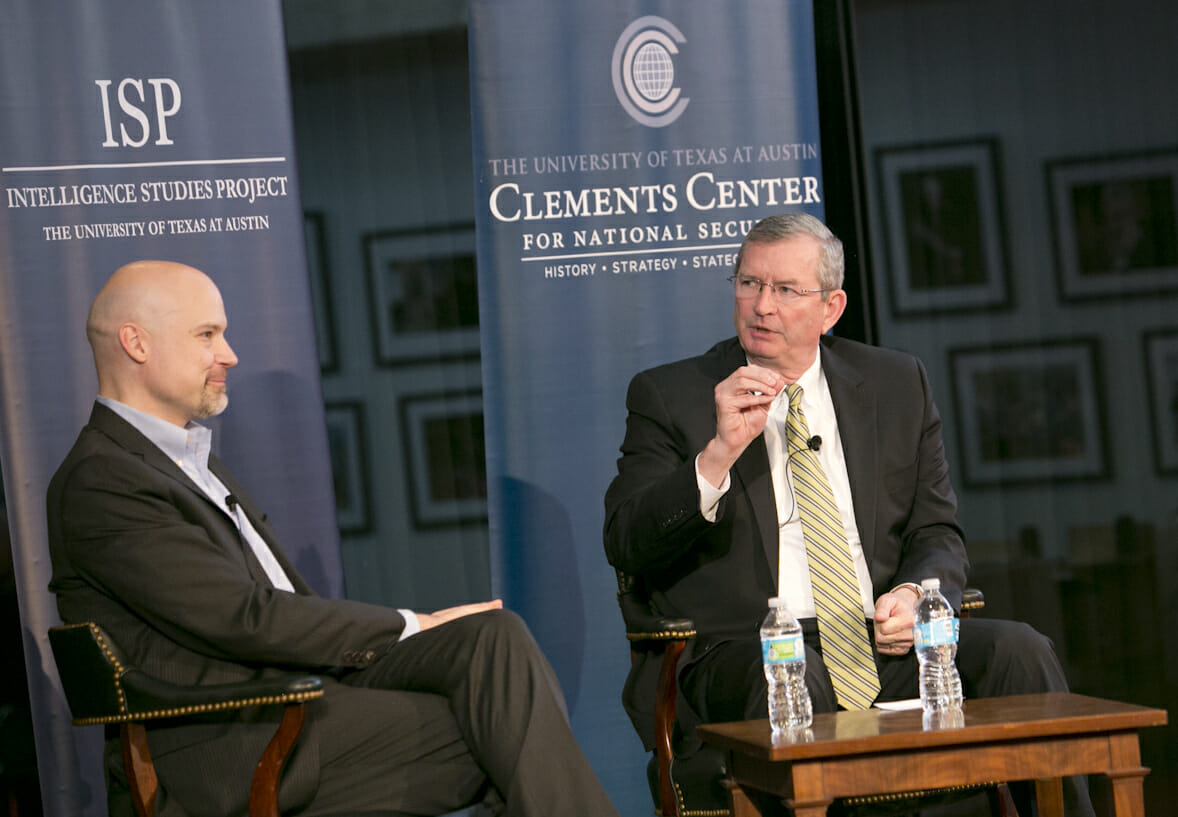 Each day, analysts and briefers prepare PDB’s for intelligence sessions with the President, and as we continue on, this process will surly keep evolving.

For more photos of the event, please click here.

Dr. Priess served at the CIA during the presidencies of Bill Clinton and George W. Bush as an intelligence officer, manager, and daily intelligence briefer. He obtained his PhD in political science from Duke University and has published his writings in outlets ranging from Foreign Affairs, Foreign Policy, and The Cipher Brief online to the Washington Post, Houston Chronicle, and Skeptic magazine. Dr. Priess presents to audiences across the country and has appeared often on CNN, MSNBC, and Fox News.