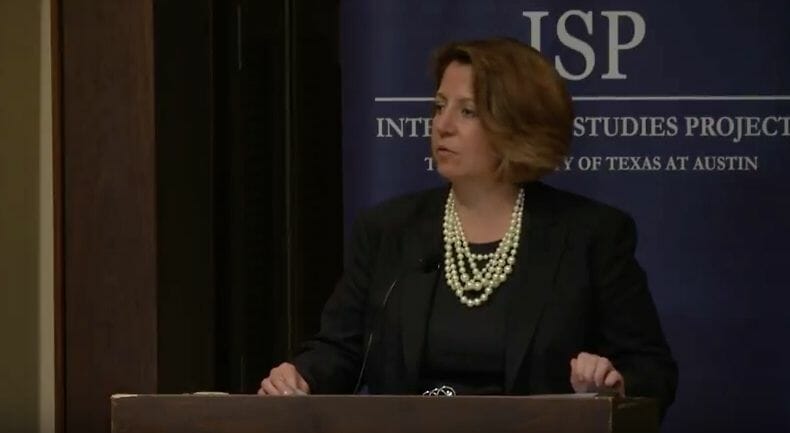 UT-Austin’s Intelligence Studies Project welcomed the President’s Homeland Security and Counterterrorism Advisor, Lisa Monaco, to campus on Wednesday. Ms. Monaco delivered remarks and also fielded questions from students, faculty, and friends from the Austin community on intelligence, counterterrorism, and the steps being taken by the administration to protect the country while safeguarding Americans’ privacy and civil liberties.

This visit by Ms. Monaco and several colleagues from the National Security Council staff was part of a day-long conference focusing on “Intelligence in American Society”. More than a dozen current and former national security officials, Members of Congress, and journalists travelled from Washington, D.C. to discuss the various measures employed to ensure U.S. intelligence activities are lawful, effective, and align with the country’s democratic values.

Students participating in an LBJ School seminar on intelligence updated conference participants on a research project they are completing for the Office of the Director of National Intelligence that will include recommendations for improving how we supervise and oversee America’s secret intelligence activities.

ISP Director Steve Slick remarked that “the conference was a tremendous success, and achieved our Project’s principal objective of combining critical academic study of intelligence with policy relevant research at a public conference that involved many of our nation’s national security leaders”. Ms. Monaco’s remarks at the intelligence conference can be viewed here.

Ms. Monaco’s remarks were also quoted by Eric Schmitt, from The New York Times, in his article “U.S. Officials Met With Belgians on Security Concerns Before Attacks.”