“Living Lies: A Novel of the Iranian Nuclear Weapons Program” – A Book Talk and Conversation on Counterproliferation 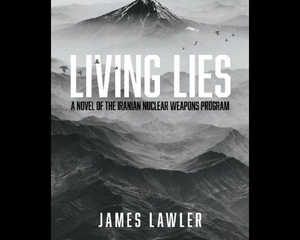 On Wednesday, April 6, 2022, the University of Texas at Austin’s Intelligence Studies Project, Strauss Center for International Security and Law, and Clements Center for National Security hosted author and former Central Intelligence Agency (CIA) operations officer, James Lawler, for a talk on his recently released book, Living Lies: A Novel of the Iranian Nuclear Weapons Program, which was followed by a conversation on counterproliferation. The talk was moderated by Steve Slick, Director of the Intelligence Studies Project.

James Lawler served for 25 years as a CIA operations officer in various international posts and was a member of CIA’s Senior Intelligence Service (SIS-3) from 1998 until retirement in 2005. He was a specialist in the recruitment of foreign spies, and he spent more than half of his CIA career battling the proliferation of weapons of mass destruction. As Chief of the A.Q. Khan Nuclear Takedown Team, which resulted in the disruption of the most dangerous nuclear weapons network in history, Lawler was the recipient of one of the CIA’s Trailblazer Awards in 2007, marking the 60th anniversary of CIA. DCI George Tenet sent Lawler a note which stated, “Jim, what you and your team have achieved will rank up there as one of the most spectacular intelligence accomplishments in the history of the CIA.” Former CIA Deputy Director John McLaughlin noted that the effort was “the closest thing I’ve ever seen to a perfect intelligence operation.”

Lawler also received the Director’s Award from DCI Tenet, the U.S. Intelligence Community’s HUMINT Collector of the Year Award, and the Donovan Award from the CIA’s Deputy Director of Operations.

Prior to his career in intelligence, Lawler was a graduate of Rice University and the University of Texas School of Law. He has completed two novels: “Living Lies,” an espionage story of the Iranian nuclear weapons program, and “In the Twinkling of an Eye,” about a devastating covert Russian-North Korean genetic bioweapons program. Both have been cleared by the CIA’s Publication Review Board. He is currently writing his third espionage novel, “The Traitor’s Tale,” about treachery and treason deep within the CIA.