Freedom and Dissent in Contemporary Russia: A Conversation with Vladimir Kara-Murza 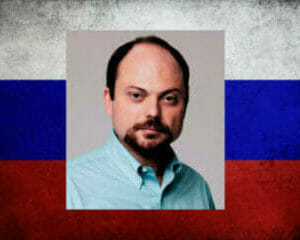 On Wednesday, February 9, 2022, The University of Texas at Austin’s Intelligence Studies Project, Strauss Center for International Security and Law, Clements Center for National Security, Global (Dis)Information Lab, and the Center for Russian, East European, and Eurasian Studies hosted Vladimir Kara-Murza, Russian opposition politician, author, and historian, for a public talk on freedom and dissent in contemporary Russia. The talk was moderated by Dr. Kiril Avramov, Director of the Global (Dis)Information Lab, Assistant Professor at UT’s Department of Slavic & Eurasian Studies, and ISP Fellow. For event photographs, click HERE. See below to view the video.

Vladimir Kara-Murza is a Russian politician, author, and historian. A longtime colleague of opposition leader Boris Nemtsov, he was a candidate for the Russian Parliament and served as deputy leader of the People’s Freedom Party. Leading diplomatic efforts on behalf of the opposition, Kara-Murza played a key role in the adoption of targeted Magnitsky sanctions on Russian human rights violators in the United States, European Union, Canada, and Great Britain. U.S. Sen. John McCain (R-Ariz.) called him “one of the most passionate and effective advocates for passage of the Magnitsky Act”; U.S. Sen. Ben Cardin (D-Md.) described him as “a courageous advocate for the democratic process and fundamental universal human rights.” Twice, in 2015 and 2017, Kara-Murza was poisoned and left in a coma; a subsequent media investigation by Bellingcat and The Insider has identified officers of Russia’s Federal Security Service who were behind the poisonings.

He is a contributing writer at the Washington Post and hosts a weekly show on Echo of Moscow radio, and has previously worked for the BBC, RTVi, Kommersant, and other media outlets. He has directed three documentary films, They Chose Freedom, Nemtsov, and My Duty to Not Stay Silent; is the author of Reform or Revolution: The Quest for Responsible Government in the First Russian State Duma; and is a contributor to several volumes, including Russian Liberalism: Ideas and People, Europe Whole and Free: Vision and Reality and Boris Nemtsov and Russian Politics: Power and Resistance.

Kara-Murza led successful international efforts to commemorate Nemtsov, including with street designations in Washington and Vilnius. He was the founding chairman of the Nemtsov Foundation and served as vice president at Open Russia and the Free Russia Foundation; both organizations were designated as “undesirable” by Vladimir Putin’s government. Kara-Murza is a senior advisor at Human Rights First and a senior fellow at the Raoul Wallenberg Centre for Human Rights; and has been a visiting fellow at the University of Chicago, leading a seminar course on contemporary Russia. He has been profiled on CBS 60 Minutes and NBC Nightly News, and has appeared on CNN, Fox News, MSNBC, and BBC Newsnight. Kara-Murza is a recipient of several awards, including the Sakharov Prize for Journalism as an Act of Conscience, the Magnitsky Human Rights Award, and the Geneva Summit Courage Award. He holds an M.A. (Cantab.) in History from Cambridge.